I was trying to get AutoDeploy to work in a Nested ESXi configuration whereby I configured stateless caching, but each time I would end up with less and less hair as the Host Profile just would NOT apply and I’d see “Host does not appear to have a compliant stateless cache”. 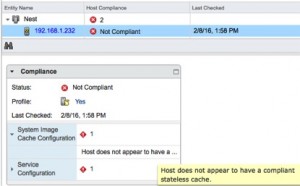 It always came down to the application of the “System Image Cache Configuration” that would result in the Profile failing to commit. Frustrating as it seemed, I was almost at the point of giving up, until I tried exhaustively hunting through the log files:

/var/log/syslog.log which always returned: “filesystem was created but mount failed on device “mpx.vmhba1:C0:T0:L0:6″.: Not found”

I then started looking through

/var/log/vpxa.log for more detail and found:

I Googled the status 1048320 and as if by magic, the article below was returned from William Lam from back in 2013 which effectively states that whilst vSAN does not make use of SCSI-2 reservations the LVM driver still requires it in order to create a VMFS datastore. By entering the following command on the ESXi hosts presenting vSAN (yes – the physical hosts, not the Nested VMs), this fakes the required SCSI reservations needed to proceed:-

After running the command on the first of my three host cluster nodes, compliance turned green and I had a smile back on my face.

Given that vSAN is becoming more and more prevalent and the existence of so many Nested configurations, I figured I’d try to share and bring this important tip back to life.

How to run Nested ESXi on top of a VSAN datastore?